How to change a fiddle string

Trying to change a fiddle string can be a bit daunting if you’ve never seen it done before. It’s worth spending a bit of time finding out about it before taking the old string off your fiddle. Although the process is fairly straightforward, there are a few pitfalls to avoid!

I’ve broken the process down into several steps:

Familiarise yourself with the parts of the fiddle

Putting on a new string

How often to replace a string

Changing a full set of strings

The parts of the fiddle

If you’ve never changed a string before, have a look at these parts of your fiddle with your original string in place, to see where the string sits along its length. Notice the  pegs, which each have a hole where string end threads through. The string is wound around the peg for several turns to hold it firmly in place. The peg box holds the four pegs in position. The nut & bridge both work together to keep the string sitting in position above the fingerboard. Each has 4 notches, for keeping the 4 strings in position. There should be a tiny plastic sleeve round the e string where it sits on the bridge. Many fiddles have fine adjusters (also called fine tuners) at the tailpiece end, which have little ‘arms’ with slot between them that holds the ball of a  ball end string in its place.  As you look down onto the fingerboard from above, with the body of the fiddle closest to you, the fiddle is strung with the  strings in this order: G D A E

Find out more about the different parts of a fiddle

Choosing new strings for a fiddle

If you need to replace a string, how do you know what sort of string to buy? There’s a confusing array of possibilities to choose from!

The particular fiddle strings you choose will depend partly on your fiddle, and partly on your own preferences, regarding the sort of sound you like. As you become more experienced as a player, you’ll begin to hear much more subtle variations in sound. It’s quite possible that over time you’ll decide to experiment with different brands of string, to help you achieve the sound you want in your playing. Here’s a link to information about the quality of sound different brands of string make. If you’re happy with the sound your fiddle makes, then you’ll want to replace the string with the same brand that is already on there. So how can you tell what brand those strings are? You’ll see that at either end of the string, it’s wound with coloured threads. These will help you identify the make, as different makes are ‘coded’ with different colours. And fortunately, there’s a website which allows you to search for fiddle strings by colour, which can help you identify the make of your existing strings.

The other thing you’ll need to know is whether to buy strings with a ‘ball end’ or a ‘loop end’. These refer to the end of the string which attaches near the tail piece of the fiddle. The names are very descriptive! Deciding which you need will depend on what type of adjusters (if any) you have on your fiddle. You can find out more from this fiddle website.

If you’re new to changing fiddle strings replacing them one at a time also leaves no doubt as to which peg you’ll be using for the new replacement string.

To remove the old string, unwind the string at the peg end while gently pulling on the string. You may have to put a fair amount of pressure on the peg to loosen it if it hasn’t been used for a while. After a few turns of the peg the string should come free. You may also need to shoogle the string about a bit to pull the end out of the hole in the peg. You can then lift the ball end of the string free from the fine adjuster as well.

Before putting the new string in check your fine adjuster. If the string has been in place over a long period it’s likely that the fine adjuster will have been tightened a lot as the fiddle has been tuned over time. When you’re replacing a string it’s an ideal time to unwind the fine adjuster (by turning it anticlockwise) until it just starts to feel loose in the thread. This will give you plenty of ‘room’ in the adjuster to re-tune your fiddle in future.

Putting a new string on the fiddle

Take new string and make a right angled bend 1-2 cm from the end. This will help keep the string in place when you start winding it into the peg. Turn the peg so you can see the hole and thread the end of the string into the hole, up to the bend. Maintain a small amount of tension on the length of the string and start to turn the peg away from you. You’ll be turning clockwise for pegs for the A and E strings, which are on the right hand side as you look down onto the fiddle, and anticlockwise for the pegs for the D and G strings, which are on the left hand side. As you wind the peg round the string should wind neatly along the peg, towards the head of the peg. Keeping a little tension on the string, check it for length – once it is an inch or so longer than you need slot the ball end in between the arms of the fine tuner. Make sure this is fully pushed home, otherwise it may pop out when you tighten up the string.

Continue to tighten the string using the peg until there’s enough tension on it to hold it firmly in place, checking that it is sitting in place in the slots in both the bridge and the nut.

If the string you’re replacing is an E string  it will have a small length of plastic sleeve on it. This needs to sit in the slot on the bridge. Without this sleeve, when the string is tightened it would gradually cut down into the bridge (it acts like a cheese-wire when it’s under tension!). The plastic sleeve protects the bridge from damage. The sleeve should be positioned so that it sits flush with the bridge and the excess is on the side near the fine adjusters. This will stop the sleeve interfering with the string vibrating when you’re playing.

Use the peg to roughly tune the string, leaving it slightly flat of the note you’re tuning it to. Then use the fine adjuster to finish tuning it. A new string will stretch a lot over the first week or so, and will go flat as it stretches. So over the first couple of weeks you’ll need to re-tune your fiddle very regularly. When you first put the string on you’ll find it goes flat again within a matter of minutes! Because of this it’s worth planning your string-changing to make sure you don’t have to put a brand new string on just before you are planning on playing with others, or performing.

Playing more often will help to stretch the new string.

How often should you replace your fiddle strings?

There are several reasons you may want to change a fiddle string or a set of strings. Many fiddle strings are ‘wound’, and have a thin wire wrapped in a tight spiral around a core. As strings get old this thin wire becomes worn and can break. If this happens you’ll notice an area on the string that feels rough under the finger. It generally happens on the area of the string that the fingers fall on most often when playing.

If your strings haven’t been changed for a long time you may notice that a particular string sounds much less resonant, or that you find it much harder to hear whether it’s in tune or not. This is a sign it’s time to put on a new set.

How often you change your fiddle strings depends on how often you play.  If you’re starting out with playing it may be less apparent when your fiddle needs new strings. As your ear becomes more able to pick up subtle nuances in the quality of sound you’ll develop a better sense of when it needs to be done. As a very rough rule of thumb, change them at least once a year.

Changing a full set of strings

If you’re changing all the strings at once, there are a few other considerations. Inside the body of the fiddle there’s a vertical post called the soundpost. It’s placed close to the bridge and is wedged in between the front and back of the fiddle. If you look into the body of the fiddle through the f hole you will see the soundpost sitting off centre, on the same side as the fiddle’s e string. It’s kept in place by the pressure exerted on the front of the fiddle by the tightened fiddle strings which push down on the bridge. If you were to remove all the fiddle strings at the same time this tension on the face of the fiddle would be released, which runs the risk of dislodging the sound post. If the soundpost moves at all it will affect the sound of your fiddle. If it falls over, putting strings back on risks cracking the fiddle as you tighten the strings. The fiddle bridge is also held in place by the tension of the strings. and without these it will fall over.

So it’s really important not to take all the strings off the fiddle at once. If you’re replacing a full set of strings, replace them one at a time making sure you’ve tightened each new string so it has some tension in it before removing the next one. You can also minimise the risk of problems by with the sound post moving by laying your fiddle on a flat surface to change the strings.

If you’re changing a full set of strings at once, it’s also important to be aware of the effect of tuning on the bridge. If you look at the bridge from the side, it should be sitting vertically on the face of the fiddle.  When you tune a string using either the fine adjusters or the pegs, the string tightens and pulls on the top edge of the bridge to some degree. Tuning from the peg end has a much greater effect than tuning from the fine adjusters. So if you replace all the strings at once, there is a risk that the top edge of the bridge will be pulled over towards the pegs as you adjust the tuning of each string. If it pulls over too far  from sitting vertically it will eventually collapse, either as you’re tuning, or when you’re playing the fiddle. It’s really important to check the bridge is still vertical once you have the strings in place on your fiddle

Have you found this website useful? Please consider donating to support me to continue to build further resources for fiddle players - thank you! 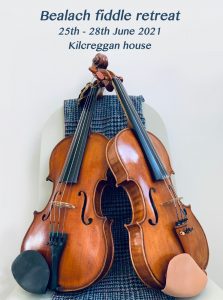